How to build a wind turbine

3-8th October 2004
with Hugh Piggott This was the third workshop course of this name at CAT.  There will be another on 2-7 Oct 2005.
The course is largely practical although I did a couple of evening lectures on theory of alternators and blades.
More courses of this sort can be found on my workshops page.
As always the event attracted a very special group of people and we had a lot of fun and worked hard to create two battery charging wind turbines during the week.
The larger one (2.4metres/ 8 feet in diameter) was erected and tested at CAT in the pictures below.
It will be taken to Nicaragua for village electrification.
The smaller one (1.2metres/ 4 feet in diameter) was taken to a test mine site in Cornwall and you can see a picture of that at the end too.

Here is the group

Elwyn (CAT engineer) introducing the welding shop and talking safety.  CAT is the most safety conscious site where I give courses.  This has got to be a good thing!
The blades belong to an old LMW 1003, down for refit.

Tony and Holly get to work ripping the blade wood down to size by hand.  Not that hard with a really sharp saw, and it got them warmed up.

Using a piece of hardboard to draw a circle for the stator mould.  Pretty accurate and easy to do.

Holly checks her progress shaving wood down to the line.

Mark and Felix preparing the mould.  A nice airy workplace.  Mostly the weather was sunny but some days were foul.

John checks the drop with a level.
John and Mike came from Peace and Hope Trust - a Christian charity helping out in Bluefields on the Atlantic coast of Nicaragua.
The wind machine we built in 2002 went to Bluefields.  This year's will follow.
Amazingly, there happens to be a group of dedicated young french and americans producing exactly the same wind turbines in Bluefields now.

Mark winding coils.  Notice the lack of support for the spool.  If the spool is large then one can safely take wire off the side.  I am indebted to Moses in Ghana for this tip.

Blade carving in the pole barn.  Conor in red.

Jan gets busy cutting up the steel.

An improved technique for measuring the offset of the alternator axis.  Measure from the outside of the yaw tube.

Mike cleaning scale off the magnet disks.  This was the first time I got the 12 mm holes cut by laser along with the disk outside and inside diameters.
Worked very well and saved a lot of hassle.  Hardly costs any more to do.

Phil and Wembi drilling the mounting holes for the shaft flange.

Paul with the alternator support brackets.

Wembi sawing wood the African way (vertically).  It's cold in Wales in October.

Holly and Phil mark the centre line of a blade.

CAT is a beautiful place to work in the Autumn weather.

Paul sets up the yaw frame at the correct angle.  The next step is to weld the tail bracket onto the top of the yaw tube, standing vertically.

Phil cuts the blade root to the correct 120 degree angle.

Mr. Lee has a go with the draw knife.

John, Rob and Mark start to create a stator casting.  Note the screw which will support the wiring coming out at the centre of farthest edge.

John pouring the resin.  Notice the wiring fitted to the screw mentioned above.  The flexible conduit is a big improvement on trailing wires.
A longer piece of conduit would have been cleverer if I had thought of it.

Tony and John place the final layer of fibreglass.

Screwing down the lid.  Rob helps John while Tony and Mark watch.

Here he is again plying the drawknife with an expert touch.

Holly has a go at welding with the MiG

The completed stator halfway out of the mould.  It was a bit soft and we then put it back in front of the 500 watt lamps for a few hours to harden.

Paul drilling the clearance holes for the blade mounting studs.  He has some assistance keeping the drill bit vertical.

The mould for the small (1.2m blade diameter) stator being set up true (square) relative to the shaft.

Conor with the completed tail.

Rob  checking the blade studs of the small machine for true alignment.

Fitting the studs in the big machine.  The nuts have been previously fitted and tightened.  It's hard to work on them after the magnet rotor is there to grab the spanners.

Putting on the stator.

Rob uses a piece of plastic pipe to spin the completed alternator while Phil, Conor, Paul and Felix check the output voltage and frequency.

Mike fits the blades.  They were a bit stiff, and hence the clamps. 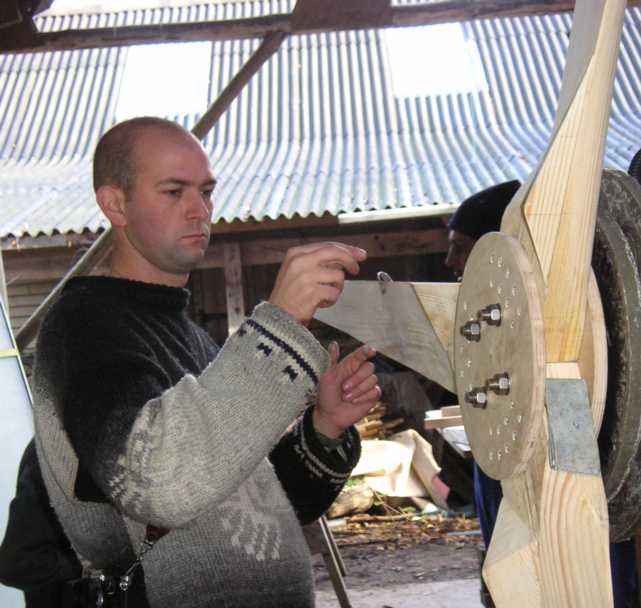 Conor uses a small weight to check blade balance.  He moves the weight out along the blade until it has enough torque to start the rotor turning.  The position has to be the same for each blade.  If not, the balance has to be corrected by small weights screwed on near to the hub.  This degree of fine tuning ensures that the machine will run perfectly sweetly.
You can see a large weight in the foreground.  This was added earlier to coarsely balance the assembly.

Another successful casting.  The stator of the small machine comes out of the mould.  The lid and the surround have already been taken off.
Buyile (not present) did the lovely central boss using a plastic bucket.

Erecting the gin pole.   Nobody without hard hat allowed near.

Conor wiring the rectifier box connections to the tower cables.

Sliding the 2.4 m diameter machine onto the top of the tower.  Mike watching.

Turbine erection.  Conor in charge. Great test site half way up the hill above CAT.

Job done.  We saw some output from the machine but not much as there was very little wind.


The machine in its new home in Nicaragua.

Dear Hugh,
I am glad to report that the CAT generator has been successfully installed at the " Solar House" in the village of La Barra on the Atlantic coast of Nicaragua. I attatch some photos of this ,which I hope you can use on your web site.We manufactured our own 40 ft mast using local materials purchased in Bluefields ,the main town and shiped it all by boat up to La Barra.We were restricted to 40ft due to the site restrictions for placing the guy wires. This does not seem to cause any problems for the generator with very little change of wind dirrection.The maximum output measured so far is about 200-250 watts using a comercial charge controller.The system provides power for 5 , 120 v lights and fans from an inverter. 12v lights are also provided as a backup.We will probably use a battery charger powered from the inverter to charge local peoples batteries.
Best wishes
John Howson

The small wind turbine on test in Cornwall.  We held a raffle.  Holly won it, and took it there and got it going.

"The small turbine is up at a test mine site in Cornwall, it was put up earlier this month by myself and class mates. The erection was done during activities week when as a group we were supposed to generating electricity from biodiesal, this was a horrible dissaster due to planning and the turbine saved the groups moral and sense of achievement - thankyou very much!! Attatched is a photo graph of the turbine spinning alarmingly fast! The photo was taken on a phone camera so there is a strange effect that has made the blades look a bit surreal!

Anyway we hope to be using a data logger to record its output but this is phase two of the project. There is also talk among the group of attatching a nose cone and a metal plate on the back to conduct the flux to improve performance - I will keep you posted.

Thankyou once again for the excellent course it was extremely helpful for my present studies.